Hey, folks. I’m not going to waste any time with preamble. You all know what we’re here for. I, DJ D, for real, this is not a drill, no kidding, actually met two of my biggest celebrity crushes last weekend. I FINALLY MET CHRISTINA RICCI…and FAIRUZA BALK!

The whole thing went down at the Horror Hound Weekend in Cincinnati, OH. I drove up on Friday night and crashed with one of my best buds, Brian of Review the World. The weekend was pretty eventful, and was full of firsts all around.

Before we get to the main event, let’s talk about the drive. That trek through Tennessee and Kentucky is incredibly pretty. Being flanked by enormous mountains for much of it makes being stuck alone in a car for 8 hours go by a little faster. You’re also surrounded by loads of billboards advertising pure Tennesse moonshine. If you’re wondering right about now if I stopped off and got myself some moonshine…Oh, I got myself some moonshine.

About halfway into the trip, I popped into Thunder Road Distillery, where the folks there were kind enough to give me a lineup of free samples. I hadn’t stopped off for lunch yet and was kind of running on an empty stomach, so I took it easy on the samples, but I did partake enough to get a feel for what they have to offer. I was looking for the purest, strongest, non-flavored moonshine they had. Give me that hard stuff. I wanted my hair to grow hair. So they hooked me up with a small bottle of Dumpling Creek, and told me it was 100 proof. I’ve had the real deal before, straight from a still in someone’s back yard (South Carolina, y’all!), and I was told that that sort of thing is typically 120 proof or so. Close enough.

I put it to the test that night once I got to town. Brian, his new lady friend, and I polished off the bottle. She and I took it straight, but he had to mix it with some Orange Vanilla Coke to make it go down easier. I’ll never let him live that down, by the way. It certainly wasn’t as strong as the real deal that I’ve had in the past, but it did the trick. I actually enjoyed it. Considering how strong it was, it was surprisingly smooth, and can best be described as a high end vodka, turned up to 11.

We also hit up a burger place called Mad Mike’s that was fucking delicious. I haven’t had any other burgers in Ohio, but I’d be surprised if there’s a much better one anywhere.

Saturday morning, after a solid breakfast, we made our way to the convention. I actually got my first glimpse of you-know-who as I was standing in line to get in, I just happened to be standing near one of the back doors used by security when I heard someone yell, “It’s Christina Ricci!” I turned just in time to see security walking her into the building. The morning was already starting well.

Once we made our way inside, I was instantly hit with how huge this thing was. You guys know I go to a lot of conventions, so I’m no stranger to a crowd, but this was something else. I’ve also never seen a con laid out this way. It was not…ideal, but it got the job done, I suppose. More on that in Part 2.

Unfortunately, my garbage phone has a crap battery and it spent most of the day nearly dead, so I have very few pictures to show for any of it, but the costumes and vendors were pretty impressive. You’ll just have to take my word for it. You’ll also have to take my word when it comes to all the other celebs I met. But let’s get to why we’re here.

The lines for some of the more A-list celebs were INSANE, and there were so many people that you had to be handed a ticket to determine what time you were even allowed to get in line. People were broken up into waves and ushered in, 50 or so at a time. As a result, even though we arrived at 11:00, I wasn’t allowed to get in line to see Christina until 1:00 or so. I was actually told it was going to be closer to 5:30 (!), but after smooth talking the lady guarding the line, she snuck me in earlier, and I was one step to making a dream come true.

The enormous crowd in front of me made it impossible to see Christina until I got about halfway up there, but once close enough to spot her, I had to take this selfie. This is my “She’s right there!” face:

So, you get up there and do the autograph/name thing with the assistant. I’ve been here plenty of times before. You give the assistant your name, pay a zillion dollars (in this case $50 for the autograph only), and they write your name down so Christina doesn’t have to even ask who she’s signing it for.

This is it. This is the moment we’ve dreamed of. DON’T SOUND LIKE AN IDIOT.

So, as she’s signing, I quickly tell her that I drove all the way from South Carolina just to meet her (even though the icing on the cake is that there were a few others I also was excited about). I also mentioned that I’ve been doing a countdown on my radio show to the big meeting and that my listeners have been excited about it too.

She looked up, smiled, and said, “Awwww, that’s so sweet!” You guys, I will have that smile burned into my brain forever.

As you can imagine, as these things go, the whole interaction lasted like 30 seconds; just enough to ramble on, shake her hand, and get ushered on. 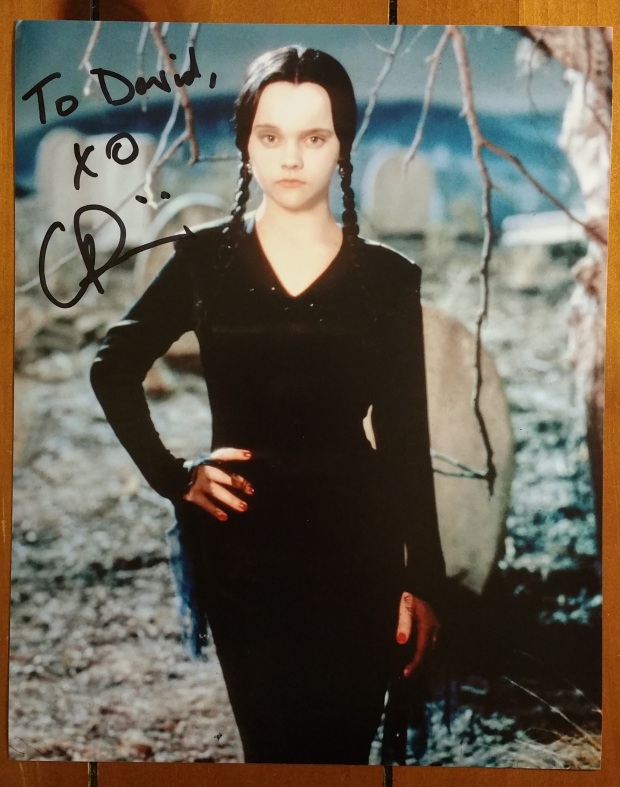 But Deej, surely you got a picture with her. That came later. It was a professional photo op that I paid for ahead of time. It’s done at a scheduled time and they herd people in and out even faster than I’ve described so far. Brian was in line with me for the whole thing and it was honestly kind of a clusterfudge. We spent quite a bit of time getting shuffled around to 3 separate lines, only to end up back in the one we started. Organization and communication wasn’t the best there, but once it finally got moving, it was fairly quick. Once in the photo op area, it literally goes, “Ok, pose, ready, GO!..and next!” You have just enough time to pose, take the pic, say 2 words, and you’re pushed out. But, it was just enough for me to shake her hand again and say, “Thank you, you’re so beautiful. I love you!”

God, I’m such a goober. I’m also dead from stupid happiness. It’s all downhill from here.

But the day actually got better! Brian had to leave a little early, but I stuck around because there was still Fairuza!

Her table was next to Ricci’s. The line started out nearly just as long, but had shortened considerably by the time I got to it. Once up there, while she was signing the autograph, I told her all about my friend Laura. I may have mentioned her here before, but she was one of my best friends in the world, and unfortunately passed away from breast cancer a little over 10 years ago.

She was one of the funniest, bravest, and most stylish people I’ve ever known. She was also an enormous fan of Fairuza, and looked almost exactly like her. The two of us talked frequently about how we dreamed of actually meeting Fairuza, so I told her that the autograph I was getting was just as much for Laura as it was for me.

Fairuza was incredibly sweet about the whole thing, and gave me a giant hug and posed for four pictures. This is probably the best one of the bunch. I showed it to a friend last night and her first words were, “Oh my God, she could be Laura’s sister!” I tell ya, kids. a guy could have a LOT worse day than meeting his biggest celebrity crush twice, and then share a huge hug with another one.

But there’s still so much more talk about! Stay tuned for Part 2, wherein we go into all the other celebrity encounters from that day, plus my first trip to Jungle Jim’s, and a rad walk through a dead mall. Thanks for reading about me finally being a doofus with Wednesday Addams.