Hey, would you guys like to hear about how I met my idol? Here we go.

I could go on and on about how important Clive Barker is to me and how much of an artistic influence he’s been, but if you’ve been reading this site or listening to Dark Entries: Goth Radio for any length of time, it’s hardly a secret. So when I found out that he and most of the cast of Hellraiser were going to make the scene at the Days of the Dead horror convention in Atlanta a few weeks ago, I made damn sure I did too. Here’s how it went down.

I’ve mentioned before when covering other conventions that I’m almost always there to see one guest. There’s always the BIG ONE that is worth making that drive, even if no one else shows up. But in this case, it was an embarrassment of demonic riches.

To avoid taking any chances, as soon as I arrive, I make a bee-line for the big one’s table, and get the autograph/picture thing out of the way. The rest of the day is gravy.

In this case, once I got to the hotel, I got my ticket and went straight to the table where you buy your celebrity photo-ops. These are typically more expensive than just paying to take a selfie with someone because they’re done by a professional photographer and given to you later on glossy paper. Unfortunately, Barker was just wrapping up all his photography for the day, so it was too late to do that. I was incredibly bummed out at first, but as you’ll see, it actually worked out in my favor. I wouldn’t have been able to afford it anyway ($85 for just the photo, autograph not included). Gah!

Since Barker was unavailable for a while, I had some time before he would make his way back to his table. The thing is, when you’re Clive Barker, you don’t just get a table; you get your own room.

I checked out the room and was glad I did, because it was all but empty aside from his people, and it gave me some time to drool over all the stuff he was selling. The most notable things were his paintings. Tons of them. They were lined up along the walls, propped up, unframed. You could even see the perforations at the top where he had painted directly onto the paper and torn it out. I was standing in a room full of work that I would slice someone from groin to gullet to own. Aside from meeting him, having one of his originals hanging in my house is also a huge dream of mine. Unfortunately, it will have to remain that for the time being, as the prices ranged from $900-1500. Deej doesn’t roll that deep, folks.

One other advantage of going to the room early was that you could pay early for the autograph, so I did. This became useful later.

After taking advantage of a fantastic lunch buffet upstairs, I headed back down and got in line to meet Clive. By that point, a couple of lines had formed – one fairly long one and another one that was pretty short. The shorter one was for pre-paid folks (ME!) and VIP members. I bypassed all the suckers, slipped into that one, and 5 minutes later, it was Clive time.

While pre-paying, I also went ahead and selected which of his glossy pictures I’d have him autograph. However, his handlers made it very clear that when you get the autograph, that’s all you’re paying for, and you’re not allowed to do the usual at-table selfie. But, you can take a picture of him autographing it. HERE IT IS! 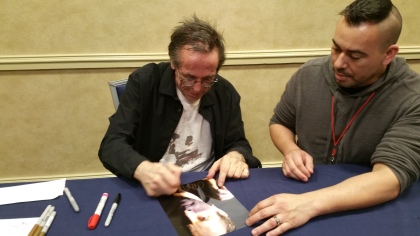 Because there were so many people in line behind me, the whole affair was pretty quick – just long enough for him to sign, and for me to shake his hand and tell him he’s my hero. I also thanked him for turning me on to Ramsey Campbell. And that was that…for now. Read on, because the day’s not done yet.

Time to meet some Cenobites. Most of the cast of Hellraiser was there, including Doug Bradley, Barbie Wilde (Hellraiser 2), Nicholas Vince, Simon Bamford, Ashley Laurence, and Andrew Robinson. It would have been incredibly cool if Sean Chapman, Clare Higgins, and the elusive Grace Kirby could have shown up as well (dream on), but I’m hardly going to complain.

First of all, I probably would have made that drive just to meet Barbie Wilde even if Clive hadn’t been there, and she didn’t disappoint. It was a major thrill to meet her and she was the sweetest lady ever. Throughout the day, we had a few conversations and I can’t say enough nice things about her.

I also can’t wait to dig into both her books. Check out my newest prize possession. I’m really digging the fact that Clive did the cover and that the Soska Sisters, who are equally cool, wrote the forward. Barbie and I spent some time talking about them and how amazing they are. They recorded probably the best promo that anyone ever has for my radio show. Tune in some time soon and you’ll hear it. I’m dying for them to call in for an interview. Speaking of that, Barbie and I also talked about her calling in, and if I could make that happen…dream come true!

I also had some great conversations with Simon Bamford and Nicholas Vince. Bamford especially is one I recommend meeting if you ever get the chance. We spoke quite a bit about surrealist filmmakers and the Dada movement. The dude knows his stuff and is a wealth of information on film history.

Meeting Ashley Laurence (who apparently ages in reverse) was another major check off the Bucket List. I don’t know what box she actually solved and who she actually conjured, but I swear, she’s more beautiful now than she was 30 years ago.

Sat next to her was Doug Bradley, and we did chat for a bit, but it was near the end of the day. I’ve met him before and kind of already did the whole “try not to fan out on Pinhead” thing. Nice guy, though.

Across from him was a table that had a speaker which was blasting some enjoyable punk, which gave the whole experience a nice ambiance, but I don’t think Bradley was digging it. He’d been listening to it all day and looked like he was having none of it. I can’t believe how long it took me to even notice who was responsible for said punk blasting…

It was Eddie Furlong! We had a short but enjoyable conversation, mostly about music and doing conventions. I know he’s had a rocky career, but he came off to me as humble and just happy to speak to his fans.

Next up was Nancy Loomis (Annie from Halloween), and we talked for a bit. Nice lady. She was selling knit caps that had “Hey Jerk, Speed Kills” printed on them, and I’d have been tempted to buy one if I didn’t already own a t-shirt that said the same thing. Plus, these photo ops and autographs ain’t cheap, kids. At this point, my budget for the weekend was pretty much maxed out.

So, the day went on and I was getting ready to split since I had nearly a 3 hour drive ahead of me, but there was one last thing I needed to do. If there’s one thing I’ve learned in all my years of convention attendance, it’s that there are two prime times to talk to a guest: super early on before the line really kicks in, and near the end. That last hour or so before the whole thing is about to close up, the lines have usually completely died down, and they’re just kind of hanging out. They’ve tired, but they’ve maybe had a few drinks, and are more apt to indulge you into a longer conversation.

I’m sure you know where I’m going with this. I made my way back to Clive Barker’s room, hoping to have a conversation that involved something a little more than, “Hi, you’re my hero…something something about Ramsey Campbell, okthanksbye…”

And it went way better than I could have hoped! I did, in fact, get to have a decent conversation with him. I mentioned that a while back I did a birthday tribute to him on my radio show, which he seemed to be pretty amused with.

Guys, it was then that I heard Clive Barker, my hero, my favorite author and artist in the world, the reason why I nearly changed my college major to English lit, say the words to me, “Well, do you ever do international phone interviews?”

While inwardly, I lost all the shit I had, outwardly, I calmly said, “Yeah, that would be great”. So, I talked to his guy, emails have been sent, and we’ll see what happens.

Wrapping things up, I made one last lap of the retailers and some of the tables I hadn’t visited yet. I got to have a fairly long conversation with PJ Soles, just about out lives and her grandkids. I’ve met her a couple of times before and running into her is always one of the big highlights of a con. I can’t believe that Lynda is totally a grandmother now.

Finally, the evening ended with a cool little encore. My phone, a total piece of 4 year old garbage, was dead at this point, so I needed to charge it before I hit the road. I made my way back upstairs, found a quiet spot with a comfortable chair and outlet, and waited it out. I’d brought my copy of The Hellbound Heart, thinking I might have Clive Barker sign it, but all autographs from him were $60 a pop, so…no. Having some time to kill while the phone was charging, I read the book from cover to cover. It’s not that long and it’s nothing I haven’t done before.

About 3/4ths of the way through, I see out of the corner of my eye Doug Bradley and his wife, hand-in-hand, walking down the hall. We’re the only three people around. I’m sat there reading the book, he looks over, gives me a smile and nod, and I give him one back. Talk about a day.

Oh, and here’s the only costumed character I got a picture of. Kane Hodder was actually there in full Jason getup too, but all I got was old bag-head here.

So another classic con was in the books and I came away with only one regret. It was not finally asking Andrew Robinson what in the hell “This is the night of the paper hats!” means while I had the chance. All these years later, and I still don’t have the first clue.