Ok, I’m not going to lie. This Halloween season kind of got away from me. I’m in the middle of two day jobs, Dj’ing gigs, a lot of travel, and well…life. But, we all know that Halloween isn’t just one day; it’s a way of life. So here’s my rundown of Halloween Weekend 2019, which at the end of the day, is much more than just a weekend. 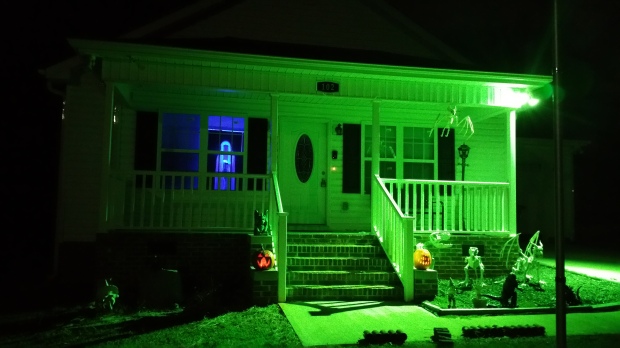 Last week, my cousin and I carved pumpkins as we do every year. This is the first carving in his newish house, and just so you know, all the decorations you’re about to see outside his house aren’t just for Halloween. He’s living the dream (nightmare?) all year round (as you’ll see even more later), so the house has been decked out like this for quite some time. Yeah, it runs in the family. 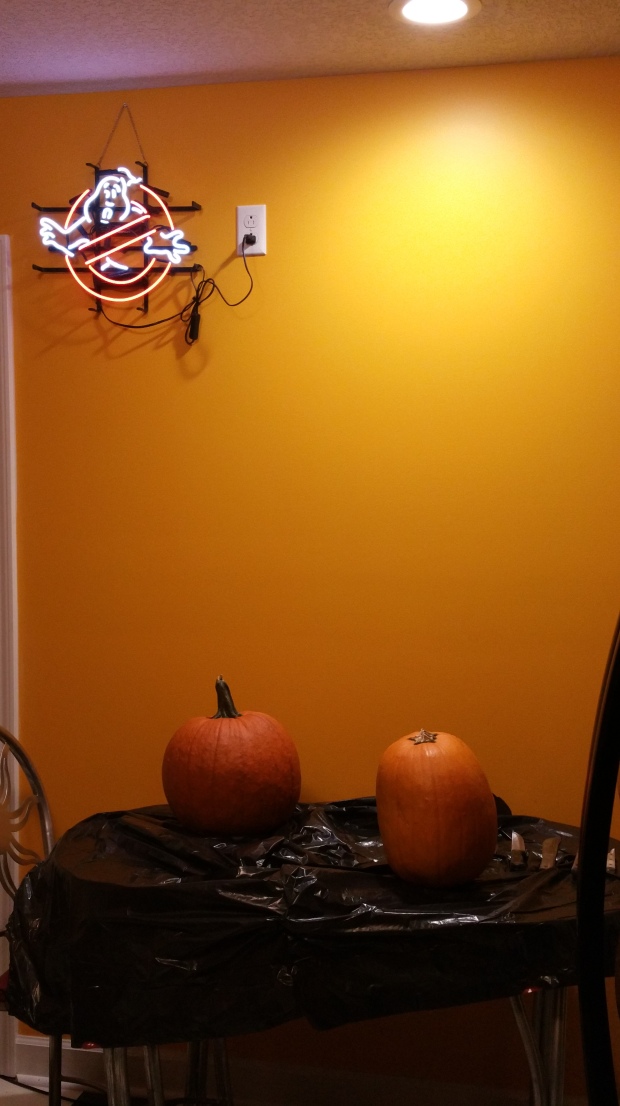 Here’s the pre-carve pic. For the sake of privacy, I won’t post too much from inside his house, but all you need to know is the entire house is ridiculous in the best way. This is just a tiny glimpse of one corner of the kitchen. 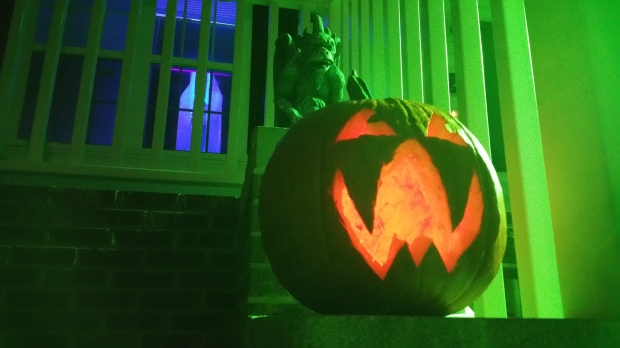 Here’s the finished project. I pride myself on my punkin carving skills, but this one suffered a little “happy accident”. I’d worked in a little hole for a nose and a few fangs in the middle of his mouth, but the fangs and the nose were a little too close to each other, so they all just fell out in one big chunk. The deformity actually kind of works, I think. 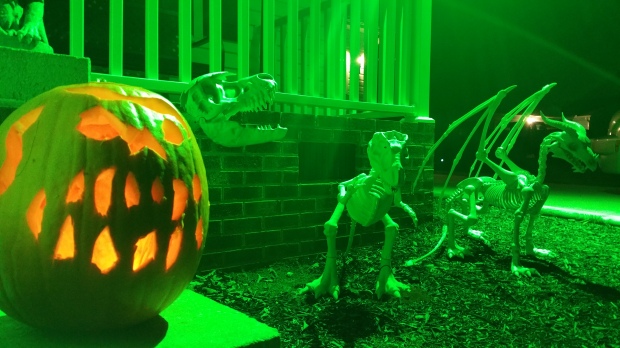 The cousin’s turned out really well too. I will say, in recent years, he’s stepped up his game and has come up with some creative designs. 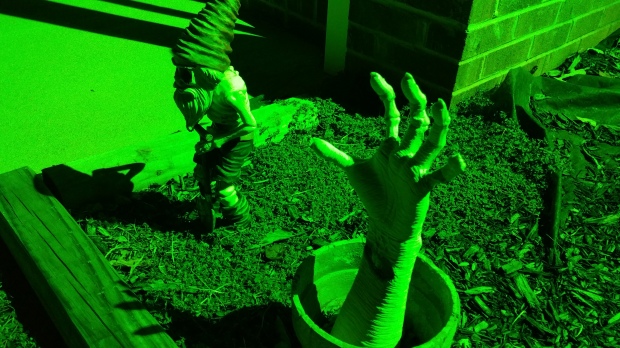 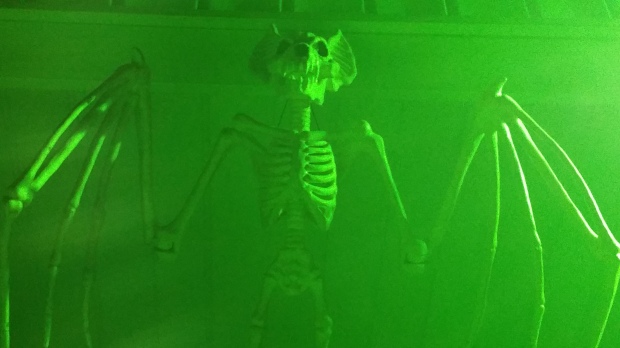 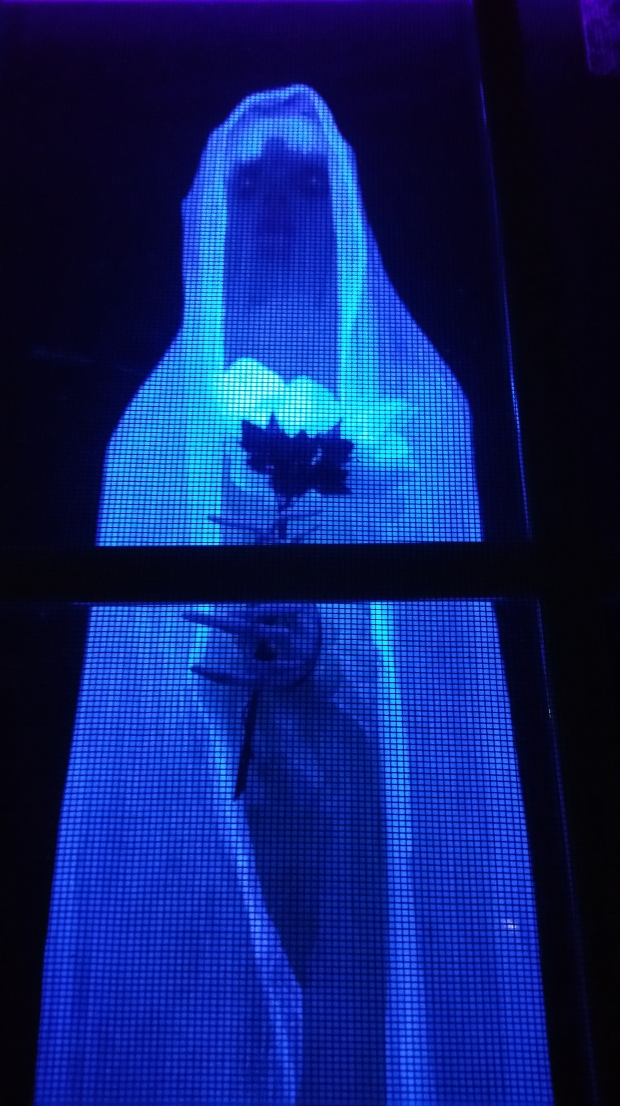 Believe it or not, for all my living on the dark side, Halloween day itself is almost always a little uneventful for me. Just like last year, I got off work and went home to watch horror movies and wait for trick-or-treaters who never showed up. I don’t know what happened to trick-or-treating, or if it’s just the area I live in, but honestly, it’s been about 10 years since I’ve had a single one. When did the shift happen that adults are keeping the fun spirit of the holiday alive more than kids? 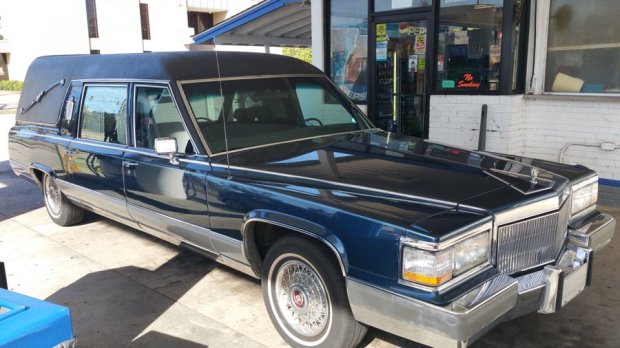 Speaking of that, my birthday was yesterday, so Halloween week soon turned into Birthoween Weekend. I spent it in just about the most DJ D way possible. The cousin went off and got himself a new ride and I drove him down to Bennettsville, SC to pick it up! The couple he bought it from bought a funeral home, which they’ve converted into their actual home. It’s about as fantastic as you can image, but I didn’t get the impression that they were much into Halloween or decorating. It’s a shame, because they took us on a little tour of the house, and they obviously have a lot of potential there that they’re not taking advantage of.

On the way back, he and I went our separate ways, and unfortunately he ended up blowing two tires. A night in a hotel and a visit to Firestone later, and he’s got four new ones, but the car will need quite a bit of work over time. His own little weekend adventure was considerably more expensive than mine, but he’s got his dream hearse (probably haunted) and is living in spook central, so he’s doing his part.

After making sure he was going to be ok with the car, I made my way to The Art Bar in Columbia, SC, where I DJ’d a fantastic show called ‘A Nightmare on Park Street Part 2’. We had three great bands who came in from all over the Southeast, and me spinning selections from horror soundtracks, and just general spooky tunes. I also got confirmation from a buddy of mine that I’m doing some voice over work in a huge upcoming animated project that I might discuss later.

I also recently got to collaborate with some buddies who did a much better job than me at grabbing hold of the season and turning it into content. Check out all of Will’s Halloween Hell Show posts over at the Casserole of Disaster, and you’ll see a few familiar faces, including myself and Brian from Review the World. We nearly died from hot sauce intake, as we do whenever we get together. Brian is back at posting regular content too, so stay on top of that. Can’t wait to see what he’s got coming up.

I hope you guys all made the most of the last few months. Halloween really is an entire season, and you have to milk as much out of it as you can. I got a late start and probably could have done more, but man did I pack a lot of fun into the last week. Those of us who are tuned in to that vibe all year have a responsibility to not let it fizzle out just because all of retail has let red and green overtake the orange and black. We’ll be stuffing ourselves with stuffing in like five minutes anyway. And let’s face it, isn’t dealing with family during the holidays the real horror?