Well, Hell’s bells, here we are. FINALLY relaunching this thing after what, a year? By the time you read these words, it will be just past Memorial Day. Obviously, there is no better way to celebrate the coming of summer than talking about some crap I got up to last Halloween. Let’s honor our fallen soldiers by writing cuss words on pumpkins.

Last October, I spent the weekend of Halloween in New York. The original plan was to go up and finally have dinner with some old friends who I only know from the internet, but that fell through, so I literally spent four days wandering the streets of New York alone by the light of the full moon. Ok, so I’m not entirely sure that a full moon was on that weekend, but it makes for a much better story, so we’re running with it.

This trip was full of firsts. Not only was it my first time in the city, but it was also my first experience with Airbnb. I’m sure mileage may vary with that site, but my experience was pretty positive. On the day I arrived, I had to swing by the Times Square area to get the key to the apartment where I’d be staying. I’m fairly well traveled, but I won’t lie and pretend that heading into THE CITY alone for the first time didn’t give me mixed feelings. It was about 80% excitement and 20% “FOR CHRIST’S SAKE, DON’T LOOK LIKE A TOURIST, YOU’RE FROM SOUTH CAROLINA AND EVERYONE WANTS TO KILL YOU. JUST PLAY IT COOL, MAN. PLAY IT COOL.”

But of course, it wasn’t that bad. It was not what I expected and exactly everything I expected all at once; a lot of people (A LOT) and tall buildings. I know none of this is new to some of you reading this right now, but if you’ve never been there, just know that you may think you’re prepared for how big the buildings are, but until you step out of the subway and onto the street for the first time ever, you’re not. I mean, just LOOK AT THIS SHIT. Come on, now.

After taking loads more pictures and a confused subway ride up to Washington Heights, I settled into the tiny 2-bedroom apartment that would be my home for the next four days. The guys I stayed with were incredibly cool and just happened to work in the film industry, so making that contact was an added bonus. They were brothers and each had their own bedroom. I had a key and slept on a futon in the living room. All of us just came and went on our own. My entire time there was spent looking up the best places I could find that would allow me to get the most bang for my very limited buck. Yes, if you want to go all out, New York can be incredibly expensive, but it can also be pretty cheap. I pretty much lived off of Chinese takeout and $1 pizza slices.

But let’s get to the real reason why we’re here. One thing I knew I had to cross off my list was stopping off at The Slaughtered Lamb Pub. It would end up becoming the highlight of my trip and my go-to spot for my last two nights in town. I probably don’t have to tell you what its inspiration is, but if you’re one of the few people not lucky enough to have seen one of the most important werewolf films ever made (I’d say one of the most important horror films ever made), then you need to get on it. Yes, of course, I’m talking about An American Werewolf in London. Actually, I take that back about you not being lucky. I’m a much bigger fan of The Howling, but I’m incredibly jealous of anyone who gets to see it for the first time now. And if you don’t know The Howling either, God bless you. Please keep reading this site. Much will be discussed about it later. 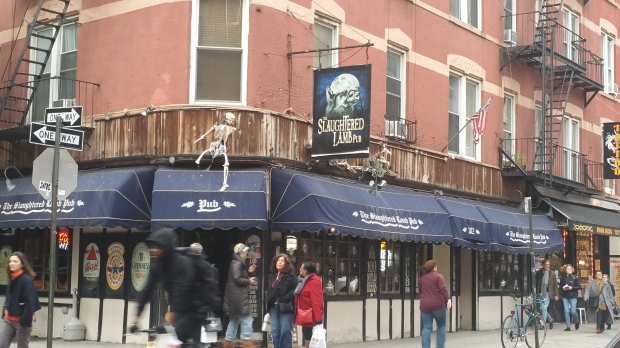 The Slaughtered Lamb Pub didn’t disappoint. The bartenders working the both nights that I was there were incredibly cool, and after a little conversation and playing the “lonely out of towner” card, they hooked me up with a free shot here and there. Since this was the weekend of Halloween, they even wore gory makeup and got into the spirit of things. My first meal there was a burger and fries and it was solid. Highly recommended. As for drinks, all of the specialty ones were werewolf themed. This joint COMMITS to their motif, folks, as we’ll see more of later.

After looking at the drink specials, I settled on “The Transformation”. It was $12 worth of deliciousness, and lets just say, gets the job done. I had to limit myself because of cost and because these things sneak up on you. After a couple, I nearly felt the desire to run to the closest zoo, strip down naked, and steal some kid’s balloons.

The bar also had pumpkins lined up on it with pens nearby in case you wanted to leave messages for future guests. Here’s my contribution, an inside joke/enterprise that I’m trying to get off the ground with Brian of Review the World and Bill of Casserole of Disaster as my partners.

Another highlight was this table top Pac-Man game that I remember from my youth. I kind of wanted to play it with someone, but couldn’t find any takers. I guess I’ll take this time to talk about some of the other patrons. Of course you had your drunk locals in costume, but I also struck up a conversation with another out-of-towner sitting at the bar. He was an older gentleman who had moved to New York about 20 years ago. We both agreed that despite their reputation, New Yorkers, while they are more direct and don’t have time for the Southern hospitality that I grew up with, they really aren’t all that bad. Seriously, in the four days I was there, nearly every single person I interacted with was incredibly polite and helpful, especially once they found out I was from out of town and it was my first time in the city. But, I didn’t come down with the rain yesterday. I know there are bad sides of town (there are everywhere), and I was careful when walking at night alone. But if you’re just looking for good conversation, I’ve found that booze is a constant and can grease the wheels of social interaction just about anywhere, and with almost anyone.

My last night there, I also got to know a really fun couple of sorts; two best friends, a girl and a guy. She was an Australian lesbian and he was her Irish gay best friend. The only reason I mention that is that someone, somewhere has to have written a joke about an Australian lesbian, a gay Irish guy, and a Southern straight man all walking into a pub with a lycanthrope gimmick. 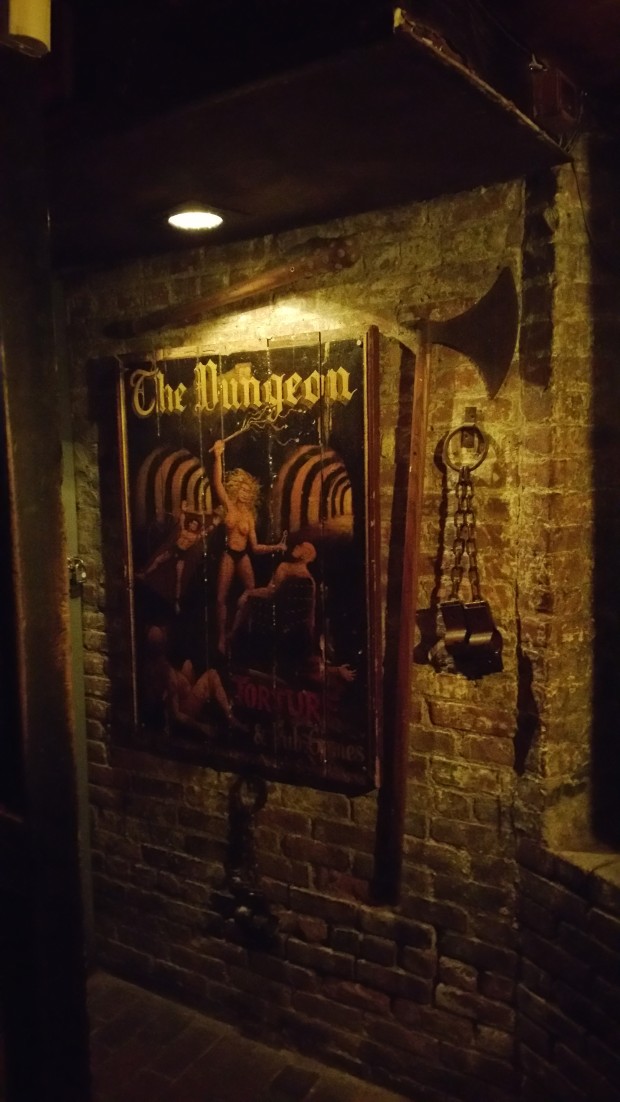 So that was the upstairs scene, but the real action is downstairs in The Dungeon. CHECK IT OUT!

The Dungeon has several rooms, including a game area. It’s a fantastic, dimly lit place full of An American Werewolf in London references and comfortable seating. It was actually not too populated the both nights I was there, so I had plenty of room to roam around and take pictures of the previous “guests”.

I seriously can’t recommend this place enough if you make yourself into the city. I spent my last night there hanging out until the wee hours of the morning, talking music and film with a strange assortment of characters, including a Colombian guy who barely spoke English, but who was high on life. Because we were going the same direction home, we shared a subway ride and swapped life stories. He got off before me and I then took this tired subway selfie. 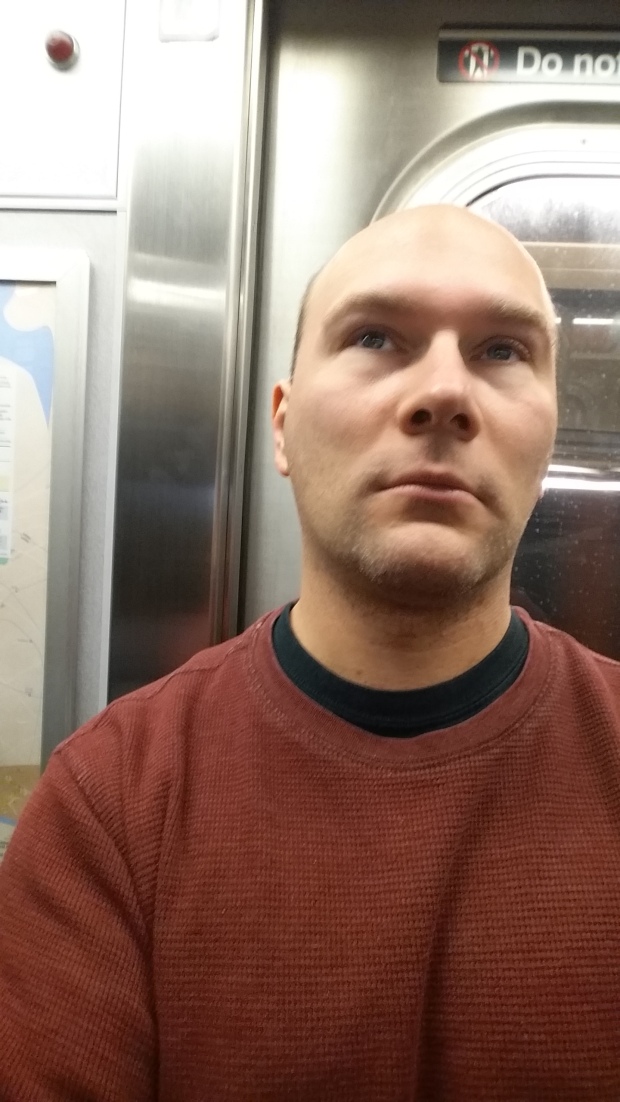 This guy was also waiting on his ride.

The night ended with me getting off the subway to make the short walk down 181st street to the apartment where I was staying. A bug-eyed nutball was walking along the sidewalk, getting in people’s faces and yelling, “I want some coffee! Give me some fucking coffee!” I nearly told him I thought he’d had enough and should probably dial it back a little or switch to decaf. It was 3:00 in the morning for Christ’s sake.

In the end, I drunkenly stumbled to my temporary home, high on too many Transformations and Halloween, and dreamed of Nazi zombies with machine guns. And that was how I spent my last night in New York.