‘Tis the season for gift giving and this is the story of how I found a fairly obscure one. Back in the days when all we had to rely on was a TV Guide to tell us what we were watching, I grew up with a handful of scenes in my head from movies I caught on TV a few times as a kid, but I couldn’t tell you the names of any of them. I lived for the chance to maybe catch that one weird cult film I saw on a Saturday afternoon once…you know, the one with the black car that drove out of the desert and killed people, magically repairing itself whenever it was damaged? Turns out it was just The Car. But, it took years for me to find that out.

And that’s what brings us to Death Game . This time around, it wasn’t me doing the searching; it was my dad. For years, I’ve been listening to him describe some wild movie he caught on TV once and he could only loosely remember the plot and one key scene. He didn’t have a clue about the title or who starred in it, but said he wouldn’t rest until he found this thing again. Recently, after quite a bit of searching online, I finally managed to find it, buy it, and watch it. I can’t wait to see his face light up when he unwraps this next week.

Let’s dive in. Death Game is a fun little Grindhouse-y home invasion film released in 1977, directed by Peter Traynor and starring Seymour Cassel, Sondra Locke, and Colleen Camp. Cassel stars as George, a man left home alone in a fairly nice two story house on the good side of town who is left alone one weekend on his birthday when his wife and kids are suddenly called away to tend to some other family business.

In one of the better introduction scenes of an antagonist that I’ve seen in a while, we first meet Locke and Camp’s characters (“Jackson” and “Donna” respectively) when they arrive on his doorstep during a rainstorm. The cinematography, cutting back and forth from him lounging inside to them lurking around outside, combined with a couple flashes of lightening, giving us brief glimpses of them, works perfectly to set them up as being an exterior predatory threat. The brief ominous mood is paused when he invites them in to dry off and warm up. There’s quite a bit of light, playful conversation wherein they say they’re lost on their way to a party. At some point, they both make their way into the bathroom and after being in there for a while, he checks on them only to find both of them nude in the tub.

The next morning, the three settle down for an awkward breakfast wherein the girls start to engage in slightly odd behavior, changing their story about where they’re trying to go, and somewhat taunting George. Realizing last night was a BAD IDEA, he drops them off somewhere out of town. It’s during the breakfast scene, ensuing argument, and drive out of town that we get the first real glimpse that these girls are, at the least, a touch unhinged.

Upon returning home, George finds that the girls have somehow BROKEN BACK INTO HIS HOUSE. The third act then kicks in, with an extended torture sequence lasting the night involving the girls killing a delivery man, tying George to a bed, destroying the house, and staging a mock trial.

While cult favorite Colleen Camp is as stellar as usual, Sondra Locke, IMO, stole the show here. Her large eyes, wide smile, expressions, and severe features further exemplified her predatory nature. She looked and sounded like a crazed hyena on the hunt, while oozing insane sexuality. She is incredibly striking and firing on all cylinders here.

Her performance actually reminded quite a bit of Sheri Moon Zombie’s Baby Firefly from The Devil’s Rejects to the point that I wonder if Death Game was an influence. I haven’t found any research to suggest that she or Rob Zombie were directly inspired by it, but I have to believe they are at least aware. Even her shrill giggle is pure Baby through and through.

The film opens with a graphic mentioning that it is based on a true story, and while there is no hard evidence to back that up, it does have many echoes of the Manson murders, which occurred only eight years before the film was released. In addition to Baby, I picked up a few traces of Susan Atkins (as portrayed by Nancy Wolfe in 1976’s Helter Skelter) in Locke’s performance.

The film’s not perfect by any means. It was shot with a meager budget, has some unnecessarily long sequences that just feel like padding, and nearly all of Seymour Cassel’s dialogue was obviously redubbed, sometimes poorly and out of sync. The transfer I saw was from the one basic DVD release that it’s been given, but the graininess only supported its Grindhouse feel, so I didn’t mind. Films like this aren’t pretty and aren’t meant to be seen in high def.

If you’re looking for a good, rainy night in with a fun, low budget home invasion flick, I recommend Death Game. For a double bill, I’d pair it with Helter Skelter, or hell, even Spookies if you want to stay low budget and just go into a different direction, further into the absurd.

Because Hollywood just can’t help itself, Eli Roth is actually remaking Death Game into a new film titled Knock Knock, slated for an October 2015 release. It stars Keanu Reeves and will also feature Colleen Camp (presumably in a much smaller role this time). She also shares a producing credit. Now that I’m officially a Death Game fan, I will definitely be staying on top of the Knock Knock news and post some updates here. In the meantime, check out these screen grabs from Knock Knock. Enjoy! 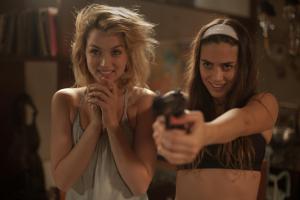