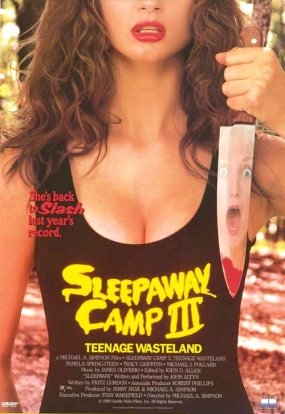 “I’ve never chopped wood before, but I’ve chopped other things.”

Alright, confession time. I totally bailed on my original idea with what I was going to do with this review. I mentioned in the last post that I was going to get the newly released Blu-ray and review the commentary and all that, but there was a mishap with a gift card and it would have taken forever for the whole thing to ship, and yadda-yadda-yadda… In the middle of trying to get this done, I’m also applying to return to my old university. I haven’t been there in over 10 years, and I don’t know if you’ve ever tried to return to a school you haven’t been to in over a decade, but I’m pretty sure I’d have less hassle and red tape trying to become to become an FBI profiler.

And played once again by Pamela Springsteen, who totally made the role her own in Part 2. I’m really growing to love her. As I’ve mentioned a couple of times, until I started this project of reviewing the ENTIRE SLEEPAWAY CAMP SERIES, I’d only ever seen the first two films, and even those only once. So, I’m intentionally going into this as blind and new as possible. Until I hit play on the Netflix machine (still not as gratifying as popping in a VHS tape), I knew nothing about this installment other than it was…well, the third one. And that’s it. I didn’t even know that Springsteen reprised her role, so it was a pleasant surprise to see her show up again.

We open to a scene of our first victim, Maria Nicastro, making her way to the bus that’s going to take her to camp, only to be suddenly chased and ran down by a garbage truck. You-know-who is driving, gets out, compacts the victim with the rest of the trash, and takes her identity. The likeness is strong enough.

This time around Angela is sporting a new haircut and punkish outfit. I’m adding this to my growing list of “Halloweeen costumes I’d like to try if I was a girl”, right up there with Wednesday Addams and Patsy from Absolutely Fabulous (Ok, I’m probably not tall enough to pull off Patsy. Saffy, maybe, but who wants to be her?).

After going all Duel on Victim #1, she hops on the bus, and is off to the woods for more good times. Borrowing once again from the Friday the 13th series, we’re off again to Camp Rolling Hills, which is the same camp of Angela’s last killing spree, now renamed Camp New Horizons.

The premise now is that the new name comes with a new management team of married couple Herman and Lily, who are desperate to downplay the unpleasantness from last time. They’re trying out an experimental program wherein they’re throwing together campers from two different sides of the tracks. Rich kids verses street kids. All the typical stereotypes are represented. You’ve got your crazy gutter punk, your Latino gang member, your angry black guy, your slut, and a bunch of white, vanilla one percenters. Well, mostly vanilla, but we’ll get to that later.

Angela (posing as Maria) wastes no time at all dispatching the next victim, a reporter who hits her up for some cocaine. You know, because it’s 1989, and she is Bruce Springsteen’s sister after all. I’m not advocating drug use or suggesting that Bruce himself would be involved with it in any way, but when your potential pusher is the only connection you’ll ever have to The Boss himself, you make some hard life decisions. The man wrote “Dancing in the Dark” for God’s sake.

So, faster than you can say Courtney Cox, the reporter’s dead (poisoned with some bad blow) and Angela continues to demonstrate her near supernatural ability to make bodies disappear, leaving behind no witnesses or evidence, in near defiance of logic or physics.

In keeping with the tradition of the last review, I’m going to just go ahead now and skip to some of MY FAVORITE THINGS, in no particular order.

BOBBY STARK
See that guy on the left? He’s one of the rich kids and is a total cornfed, aw-shucks goober. He also looks like a 35 year old high school student. It’s like Ian Ziering round about the 3rd season of 90210. But old Bobby isn’t quite as innocent as he seems. We’ll learn more later when we get to… 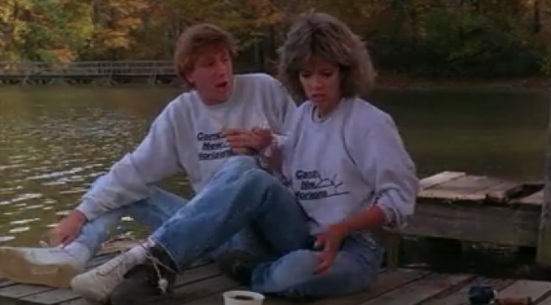 Aw hell, let’s just get to it now. While Bobby and Angela are out a the dock later, tied together at the ankle and wrist in some dodgy bonding/trust exercise, he straight up gets all Secretary and confesses he’s sweet on her and likes being tied up. Turns out, he’s really into that kind of thing. He then tries to put the moves on her, which results in him only getting slapped. Oh, and getting tied to a tree and having his arms ripped off later. You can’t win for losing.

FRIDAY THE 13TH REFERENCE
In one scene, Angela is having a conversation with one of the other campers and mentions that the date happens to be Saturday the 14th, a reference to the fact that the series has heavily borrowed from the F13 series all along.

FLASHBACK
In one of my favorite scenes in the series so far, Angela revisits the cabin from Part 2 where she sang the infamous “I’m a Happy Camper” song.

Only this time around, it’s extended. Instead of things ending there, she goes on to give a little speech about how much she’s loved, complete with all the campers in the room applauding and cheering her. Unfortunately, I wasn’t able to get my hands on the Blu-ray for this review, but I’d still like to because I’d like to see if there is mention in the commentary as to whether this extra footage was shot at the time of the second film and just left out, or shot specifically for this one.

THE SEAN’S DAD TWIST
One of the volunteers at the camp is a cop, Officer Barney. He breaks up fights and generally does other cop things, but it turns out, he’s also the father of Sean, the guy who Angela decapitated at the end of Part 2! Of course, he figures out who Angela is, confronts her, and I’m sure I don’t have to tell you how well that works out for him.

Ok, TIME FOR SOME FAVORITE KILLS! (also in no particular order at all)

CINDY UP THE FLAGPOLE
Cindy, who has spent most of her time at the camp throwing around racial slurs, gets run the flagpole and then dropped, resulting in this exchange:

Cindy: “Why are you doing this to me!?”
Angela: “Because you’re a cheerleader, a fornicator, a drug taker, a nasty, snotty bigot, and besides that…you’re real nice.”

HERMAN AND SWEET PEA WITH A STICK
Herman, played by famous character actor Michael J. Pollard, who you know from just about everything, gets it on with the camp slut, Jan (aka Sweet Pea) in one of the tents. Angela finds them and bashes their heads in with a large branch that apparently comes equipped with the least convincing “bashing heads in” sound ever effect built in. I’m going to guess they didn’t throw too much money into the foley department on this one.

PETER AND SNOWBOY
Coming upon Peter and Snowboy laying near their tent, Angela takes out Peter with the old firecracker up the nose gag, then bashes Snowboy’s head in with presumably the same branch from the last one. “Batter up!”

She then drags their bodies into another tent also containing the bodies of Herman and Sweet Pea, douses it with gasoline, and sets it ablaze with a flare. I’d like to point out that it doesn’t just catch fire, the thing absolutely explodes. As a nice touch, she even takes the time out to roast some marshmallows. We are at summer camp after all.

LILY WITH THE LAWNMOWER
Angela buries Lily up to her neck while singing the “I’m a Happy Camper” song, then runs over her head with a lawnmower!

Also, one last note about Pamela Springsteen. She only appeared in one other film after this, and then left Hollywood to pursue a successful career as a professional photographer in the film and music industry. Ironically, one of things she contributed to was a documentary called The Making of the Crying Game.

Just think about that for a second. The irony will come to you.

That’s it, folks! Come back for the next installment where we review Sleepaway Camp IV: The Survivor. Ooh, I wonder who survived!